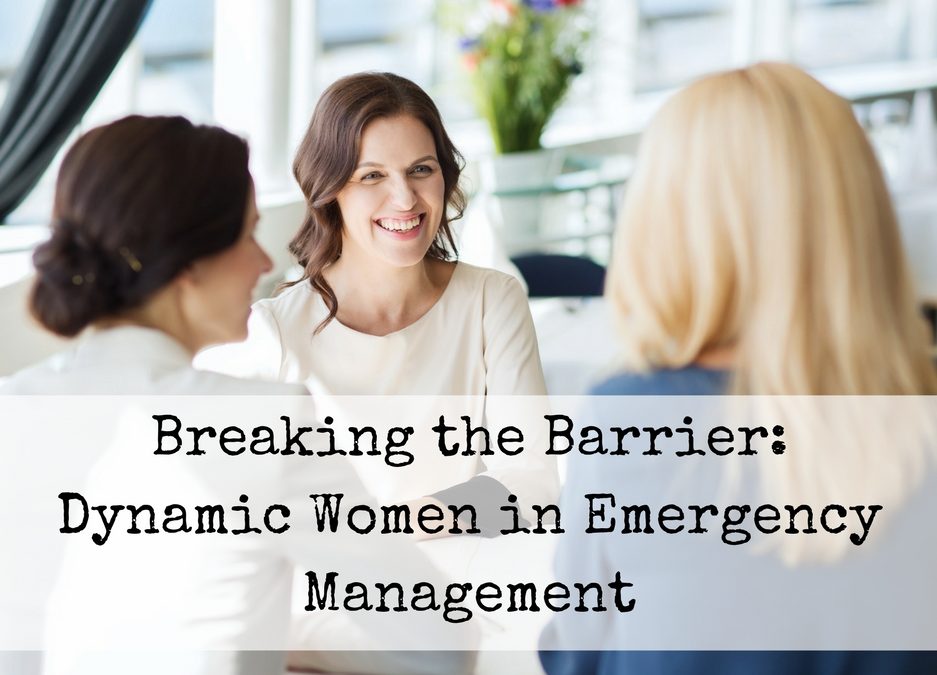 Interestingly enough, one of the earliest proponents of women in emergency management was none other than First Lady Eleanor Roosevelt. She persuaded her husband to appoint Florence Kerr to find a way to utilize women in the war effort, and the two women were instrumental in developing the Office of Civil Defense (OCD). In September 1941, Mrs. Roosevelt was appointed Assistant Director of the OSD, becoming the “first woman in Homeland Security/Emergency Management.”

Since then, women from the emergency management world have come together to establish the International Network of Women in Emergency Management (inWEM). inWEM aims to increase and support the advancement of women in emergency management. These women are professionals from all branches and levels of government; volunteer, private and public sector workers; non-profit professionals, and academics. They strive to support women from the very beginning, encouraging them to continue their education, advance their careers and enjoy recognizing their accomplishments.

Among the charter members of inWEM is Connect Consulting Services’ founder Nora O’Brien. With an extensive educational and professional background, O’Brien is founded Connect Consulting Services- add website- a national emergency management and business continuity planning firm. contributing writer for Emergency Management magazine, has served as an instructor for FEMA and has led response plans for events including Hurricane Katrina, the H1N1 flu outbreak and the California wildfires.

Following the footsteps of many emergency responders, Vilma Milmoe began as a volunteer in the 1970s, after Tropical Storm Agnes. About 20 years later she was the Director of Preparedness in the Region II office, and hen in 2001 became the Director of the Independent Study Program at the Emergency Management Institute (EMI). Milmoe is now the Senior Policy Advisor at EMI, supporting diversity and education. In an interview shortly after being inducted into the inWEM Hall of Fame, she said, “This is a complex field and we need the greatest collaboration possible to face and address these problems. We make significant improvements in the lives of people every day and we need to be able to relate to our diverse communities.”

In 2014 Elizabeth Zimmerman, head of the Office of Response and Recovery, was inducted in inWEM’s Hall of Fame. Zimmerman discussed in an interview just how important she feels diversity is in emergency management. Admitting that an organization cannot possibly know and understand every culture of diversity across the U.S., she points out that we can do better. “Diversity also includes acknowledging male and female perspectives within your organization, as well,” she said. Zimmerman began a Women’s Speaker Series, to promote women in leadership position and give FEMA employees the opportunity to hear them speak.

Women in emergency management are currently outnumbered, but they are continuing to climb the ladder and make a difference. Sometimes they do so quietly, choosing to focus on the mission at hand, and other times they make some noise, knowing that it is important for those following in their footsteps. To learn more about what women in emergency management are accomplishing, take a look at the women who founded inWEM.